Image reproduced from “The Stupa of Bharhut” by Alexander Cunningham, Plate XV

Couple of posts ago, I had blogged about the Dr. Francis W Prichett and her amazing collection of nautch/dance photographs. One among the photographs listed was “The Dance of the Apsaras” that was described as one of the oldest sculptural description of court dance. Currently the sculptures from Bharhut can be seen in Calcutta Museum. (They have an updated webpage with a gallery of images.)We will see some details about this sculpture here.

It is no surprise that dance and music figured a lot in Buddhist art, ranging from Ajanta to Amaravathi. Almost all sculptures describe the Jataka stories and/or life history of Gautama Buddha. [1]

What makes this particular sculpture interesting that the dancer’s names are inscribed.  Let’s look at some background information.

How old are these sculptures?

Alexander Cunningham, in the book “The stupa of Bharhut” dates the sculptures found in Bharhut, no later than 200 BC.

…I do not wish to fix upon any exact date, and I am content with recording my opinion that the alphbetical characters of the Bharhut inscriptions are certainly not later than B.C. 200.

What could be the background story?

One of the possibility is that of the Apsaras sent by Mara dancing to disrupt Gautama Buddha’s meditation. In the “Lalita Vistara” the event is described in detail. According to Alexander Cunningham’s book [2] (Emphasis not in original text)

When Sakya Muni after six years asceticism was on the eve of attaining Buddhahood, Papiyan (another name of Mara) despatched a troop of Apsaras to try their powers in disturbing the sage’s meditation…Some sang, some danced, and some extended their arms in various positions. Some smiled to show their teeth, while some laughed, and suddenly, as if ashamed became grave; some half exposed their bosoms; some displayed their figures through transparent garmetns; whilst others dropped their clothes and exposed the belts of gold which girdled their loins. [Page 28 from ref 2]

Of course, most of the descriptions fits like a T to the sculpture in focus. However, in canonical texts describing the daughters of Mara, mention three names Tanhaa (Craving), Arati (Boredom), and Ragaa (Lechery). [3] In non-canonical texts the names differs and are mentioned as Rati, Priiti, and Tisnaa and Rati, Arati, and Tisnaa. Still, there are THREE dancers. And, if you noticed the sculpture, it has FOUR dancers and one more person (who could be a dwarf from the court or a kid)

According to the book “Bharhut inscriptions” edited by H Luders , in a footnote for Plate XVIII it says

The lower relief, representing according to him [Barua] a ‘forecast’ of the birth of the Bodhisattva, expresses the great rejoicings ofthe deities Later on, when T. N. Ramachandran had told him the right explanation of the figure of Mara he declared that the middle relief was showing the gods having come to congratulate the Buddha on his victory over Mara…The female dancers in the relief are said to represent these daughters of Mara in their different stages of age and the dancing boy should perhaps hint at the fact that mothers also are amongst them A refutation of these views is superfluous.

Assuming that the panel is part of a jataka tale, there are a handful of Jatakas that mention dancers [see reference 4].

Names of the dancers 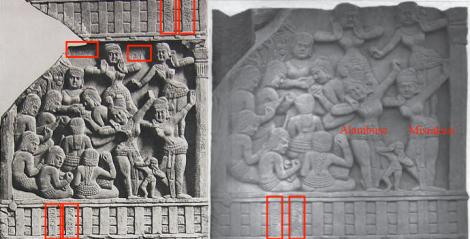 In the above image, I have highlighted the places where the inscriptions are clearly visible and two of the dancer’s names [1, 2, 5]:

Placing the apsaras Alambusa and Misrakesi in the front was on purpose as these two apsaras appear in the Jatakas such as Alambusa in”Alambusajataka” and Padmavati in Lalita vistara and Mahavastu. They are also mentioned in Ramayana, Mahabharata, Bhagavatam, Skanda Purana. [6, 7, 8]

Some clues from the sculpture that indicates that it may not be Mara’s daughter’s dancing are as follows:

So, I think it is safe to assume that the sculpture is depicting a dance drama or something like that in a court. With some more imagination one could think the following what Ludes says about.

The dance is a mimical performance in which a child takes part and the chief actress appears in the guise of a man Taking all things together, there can be little doubt, I think, that the play acted by the heavenly ballet is the nativity of the Bodhisattva, in which Suddhodana and the infant Bodhisattva himself come on the stage.

Now, if one looks at it from the dancer’s perspective, they are in a familiar pose we see today in Indian classical dance. Wish that the stones could talk/sing, we would know what they are dancing to. What do you think? 🙂

One response to “Who are the dancers in the Bharhut sculpture?”