Readers of this blog would remember a previous post called “Vintage Devadasi and Nautch Photos“. The original publication of some of the illustrations have in fact has inspired many. During my research I realized that some images were recurring. It must made quite an impact that when someone thought of printing Indian dances, they rooted down to the iconic illustrations.

Here is my compilation, in comparison with the original published images.

The leftmost overlapped illustrations are by Frédéric Hottenroth (1840-1917). He was a German lithographer and a researcher on costumes, who published books with illustrations with much needed detail, when dissemination of information was only through print. One of his book is called “Trachten, Haus-, Feld- und Kriegsgeräte der Völker alter und neuer Zeit.” in two volumes. Basically, it was an encyclopedia on costumes, home and military objects, and musical instruments of the various countries in early 19th century. You can browse through the illustrations given in the references.

Coming back to the above image, it is clear that Frédéric Hottenroth was inspired by the three other illustrations that was printed in magazines during his time. For your reference, the captions on the individual images are

If you were a keen observant you would have noticed that only a part of a illustration is visible on the extreme left. We will see that in detail now. It goes without saying that the next image is one of my favorite. 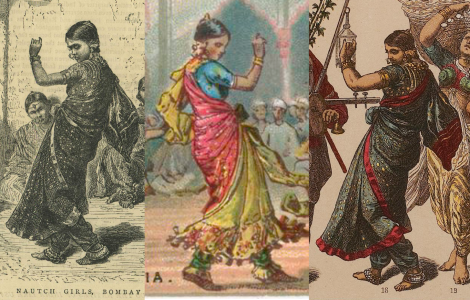 The illustration on the left was published showing a young devadasi dancing with her troupe watching. She must have impressed the illustrator for the magazine called “The Graphic” that the expression is well-captured. I could see the intense abhinaya on her face, which she would be performing at the moment! And it is intricately communicating the dynamics of the dancer. I think the above things with the widespread of The Graphic made it iconic. The caption for the first illustration in the compiled image below, is given as “Nautch girls, Bombay,” from The Graphic, 1875 (Full image here)

As mentioned, on the right most from the above image is from the same book by Frédéric Hottenroth. In fact, he had depicted four dancers to describe Indian dancers, three female dancers and one male dancer.

The middle illustration is definitely inspired from The Graphic illustration. But, it is flipped horizontally. Now, is the most interesting part that I really found exciting. This is part of a collection of cards, which have a unifying theme. The full image is given below. 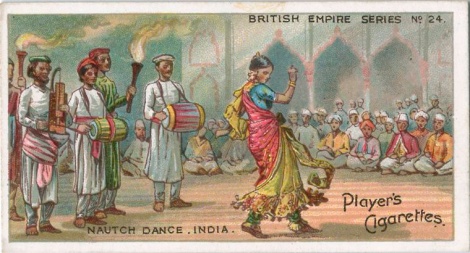 These cards were called as Cigarette cards, since they were part of the cigarette packaging. According to Wikipedia

It was common practice for the manufactures (until 1950’s) to issue a set, so that it encouraged the smoker to buy more to see the entire set of cards in one theme. Sigh!

Cigarette or tobacco cards began in the mid-19th century as premiums, enclosed in product packaging. They were usually issued in numbered series of twenty-five, fifty, or larger runs to be collected, spurring subsequent purchases of the same brand. Typically, these small cards feature illustrations on one side with related information and advertising text on the other

As deplorable it sounds, currently the collection of such cards are valuable in studying the bygone past.

The above card, clearly inspired from The Graphic, from the British Empire series card set is titled “Nautch dance” manufactured by “The Imperial Tobacco Company of Great Britain and Ireland”, and says on the back

The Nautch Dance is extremely popular in India, though it hardly conforms with European ideas of agility and grace of movement. The monotonous droning of Indian Orchestras however is scarcely conducive to lithesome evolutions.

Huh? I have no clue what it meant by “scarcely conducive to lithesome evolutions”!

In another set titled “Dancing Girls” manufactured by Scissors’ cigarettes, has  a famous devadasi from Baroda court. It is from a set of 27 cards, where she is featured under Indian dancing, number 12. See here, here and here about earlier posts about Baroda Kantimathi.

See the comparison below

In the Life magazine “colored” photo it does not identify the dancers. But, in the book titled “Bharatanatyam” by Ashish Mohan Khokar he has labeled the photo in black and white with the dancer on the right, as Kantimathi (?). (Update: I am not so sure if that is Baroda Kantimathi. Will update as and when new details emerge. Hat tip: Minai 🙂 )

In conclusion, while the German illustrator Frédéric Hottenroth was keen on getting every detail in the costumes (he misses the expression of the dancer), the cigarette cards are not true to the original. But, in making the “smoker” to learn something while they smoked probably made these quite popular to have some General Knowledge type of stuff on their fingertips!

Have you seen BN dance or dancers in unusual place/settings?