As promised here are the guest posts that you were eagerly looking forward to. (If you missed the earlier ones, you can read about it here and here.)  In the Fall of 2014, dancer/choreographer Smt. Ramaa Bharadvaj, along with other directors of Chinmaya Naada Bindu Gurukul of Kolwan India, completed a 7-week performance tour of the US, sponsored by the Chinmaya Mission West with the blessings of Swami Tejomayananda.

At the special request of BN&WWW, Ramaa narrates some of her extraordinary travel experiences, precious arts encounters and witty insights in her essay “Nava-dvaara – Nine doors to artistry”.  It is being published as a five-part serial starting this week.

Nava-dvaara: Nine doors to artistry
by

“There are no foreign lands. It is the traveler only who is foreign.” – Robert Louis Stevenson

“Oh! You are going on a foreign tour! Congratulations!”

I never could figure out how to respond to this. Yes, it was going to be a 7-week, 10-city performance tour of the United States. But “foreign?” After all, I was only returning to a country that had been my home for 31 years! How ‘foreign’ can it get?

Interestingly, the word ‘foreign’ itself has a Latin parent ‘fores’ meaning ‘a door’. And in that sense, any journey is ‘foreign’, for it opens doors for unique encounters and perspectives. This ‘foreign’ tour was no exception.

Many times, the lot of performers is such that their experiences do not extend much farther than airports, hotels and auditoriums. But it’s not through just incessant performances that an artist can gain valuable insights about life or about art for that matter. Fortunately, my tour was scheduled thoughtfully, with time enough between concerts, for a voyage of discoveries that unlocked many doors. Each door led me to people, places and events that embodied artist-qualities of communication, creativity, intuition, spontaneity, faith, devotion, universal connection and more.

It felt magical to be taking my solo work “MITRA-Dance Hymn to Friendship” on tour. What better theme could there be for a visit that was going to take me back to old friends and acquaint me with new ones?

MITRA focused on a vintage story about Krishna and his childhood friend. Therefore it felt serendipitous that my first performance was at the New Jersey Chinmaya Center, which bore the name of Vrindavan – as though Krishna was signaling an auspicious start by welcoming me to his abode. Surrounded by cornfields and farmlands, the Vrindavan Center was a serene and majestic manor for Krishna-Radha.  I had 4 days to revel in this tranquility before the performance. 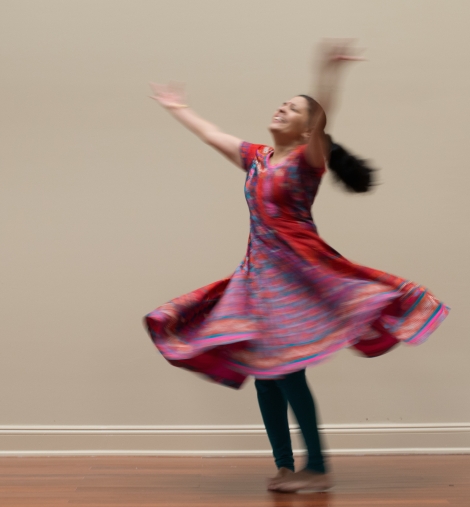 I started the days with rehearsals at dawn in the temple hall even before the priests arrived. It felt sacred to be a dancing-alarm clock to awaken the Divine Couple. There was something extraordinary about this place, but what was it, I wondered. And then Swami Shantananda shared the remarkable story.

The Center had originally been conceived with Lord Rama as the presiding deity. “But Swami Tejomayananda told us to install Krishna instead and gave the name of Vrindavan” he said. He then took me close to the altar and pointed to a small brass image.  It was a miniature version of the large Krishna-Radha idol.  “As we began digging for construction, the workers found this in the ground – an image in alignment with Swamiji’s recommendation! That large idol was made to replicate this one.”

Stunned by this narrative I looked at Krishna with renewed admiration. Having emerged from the Earth In the embrace of his beloved Radha, he seemed to smile back with silent messages:

– That New Jersey is just as sacred as Mathura
– That the ground beneath our feet is the same wherever we go
– That without those imaginary divisive lines on a map we would all have one nationality.  We would all be Earthlings.
– and much more …

The true soul of a nation cannot be incarcerated in a geographic boundary. In actuality, it lives in the inherited traditions of its people. I knew this to be true while I lived in the US, where we Indians created our India around us. Whether in the making of a daily meal or the celebration of a Festival, the Indian diaspora takes it to heart in creating an ambience that closely resembles the way they remember it to have been. These days, that seems to be a good thing and I’ll explain why.

The first year that I returned to India, I waited with bated breath for the Festival season. But the experience turned out to be a quite a torment.  Dussehra and Ganesh Chaturthi left the water bodies littered with non-biodegradable waste of gigantic statues and plastic. Deepavali spewed deafening sound, smoke and hazardous pollutants into the atmosphere that escalated my allergies to horrendous proportions. The loudspeakers atop temple towers screamed devotion into the ears from 4 am to 10pm whether I wanted it or not. A bombardment of noises stacked on top of each other in multiple layers of pitches and tones, beeps, honks, voices, bangs, hoots, melodies, motors, electronics and whistles seemed capable of even altering the cell structure of the body. This absolute lack of environmental concern left me weeping for the return to the old days.

The Hindu tradition propounds 5 sacred offerings (Panca maha yajna) as part of daily life.  These are defined as:

Should not a Festival consciously accent this practice?  Otherwise, is it not simply an empty ritual that has lost its way? 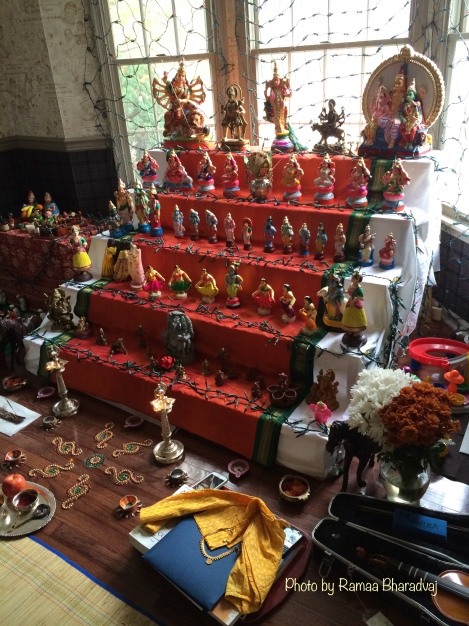 The Indian homes in the US felt like a sanctuary for our traditions. There was no dearth of mirth and celebration, feast and friends, but without the gaudy appendages. For the Dusserah Festival, the Arvind family in New Jersey had transformed an entire room with a traditional doll-display (Golu).  The prairie like setting outside, bordered by a forest of trees provided such quietude and stillness that the dolls seem to be alive in comparison. 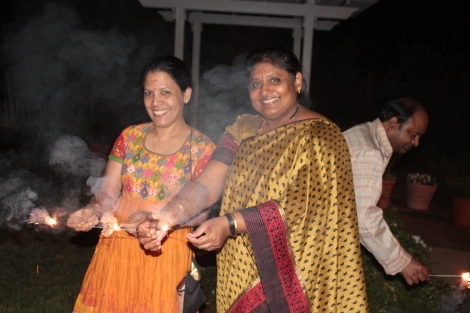 A few weeks later, Deepavali with Revathi Viswanathan’s family in Sacramento and the Vakkalagadda family in San Jose were similar in preciousness. A backyard glowing with lit lamps, hand held sparklers, an elaborate evening puja, a table laden with sumptuous health-food, absorbing conversations and lots of laughter added true glow to the Festival of Lights. The Chinmaya Sandeepany Center brought people together for a day of worship, songs, stories and feast and I had the privilege of providing the dance offering at the conclusion of the puja. 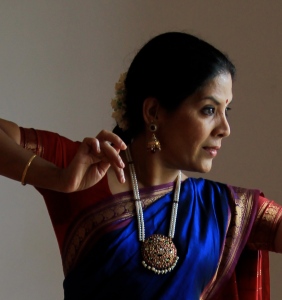 Ramaa Bharadvaj is a storyteller – sometimes with movements and sometimes with words. She is an award-winning dancer, movement designer, educator, arts advisor, advocist, and published writer.  After 31 years in the USA she returned to India in 2009 and is currently Director-Dance at Chinmaya Naada Bindu Gurukul for Performing Arts in Kolvan, India.

She dedicates this essay to Swami Tejomayananda, who recommended that she be part of this US performance tour.