A report by Mallika Madduri from Australia 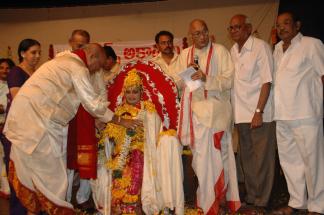 Vimala SARMA is Sydney’s best known dance teacher and performer of the Kuchipudi style of classical Indian dance, and her company, Nayika Indian Dance, is located in inner city Sydney. Vimala has made regular visits to Chennai over many years to pursue her passion for Kuchipudi. Vimala’s guru is Satyapriya Ramana, who was both a student of, and teacher at, Guru Vempati Chinna Satyam’s Kuchipudi Art Academy for many years. She has also taken short courses from Bala Kondala Rao and Kalpalathika Krishnan, both students of Satyam. Vimala has also learnt Mohiniattam, a graceful dance style from Kerala at the Vijnana Kala Vedi cultural centre in Kerala. Her company has received grants from Australian Government organizations. Nayika Indian Dance also conducts cultural tours to India.
Kuchipudi is the dance style of the Telugu–speaking people of South India (both in Andhra Pradesh and Tamil Nadu) was originally performed as dance dramas depicting stories of Krishna. The style differs from the more dominant southern classical dance form, Bharatha Naytam, by its torso movements and fluid gestures. There is greater variation in the range of its footwork, and greater spatial movement. Like other classical dance forms, Kuchipudi draws on the original dance text, the Natya Shastra, for hand gestures, and upon the rich material of Indian myths for its content. Mohiniattam (literally the dance of the enchantress) is a feminine style from Kerala.
Vimala Sarma produces her own shows in Sydney including the recent shows Raga & Rasa (2006), Lotus & Phoenix (2007) and Laya – Timeless Rhythm s(2007). In the production Lotus & Phoenix which was part of the City of Sydney’s Chinese New Year Festival of 2007, she collaborated with Chinese musicians and choreographed an original work in Mohiniattam style set to Chinese music composed for the show by Tony Wheeler. In her other shows, the Kuchipudi dances she performs are choreographed by Vempati Chinna Satyam. She performed with live music at the Sydney Opera House in her production “Silhouettes” in September 2004, which used a backdrop of silhouette images of dance poses to enhance the production. Vimala has performed in the prestigious annual Madras Festival of Music and Dance, and in other South Indian Festivals. She was awarded a Certificate of Excellence for her performance Chennai in January 2006, which was also favorably reviewed in the Telugu newspaper, Varta.
Her audiences and students in Sydney are largely non-Indian and Vimala’s approach to teaching and performing is non-traditional. She uses yoga and pilates to warm up, and Western dance principles to enhance the Kuchipudi style. She makes use of voice-overs which explain hand gestures in the dances to Western audiences before performances.
Vimala Sarma was born in Malaysia, but has been living in Australia, after winning a Colombo Plan scholarship, for most of her life. She has a PhD in molecular biology from the University of Adelaide and worked for 15 years in the Australian Public Service in Canberra, holding senior positions, before moving to Sydney. In Sydney, she was a management consultant with two private companies before starting her own research & development management consultancy, Ashwyn Innovations Pty Ltd. She is currently learning Sanskrit from the University of Sydney.
Vimala Sarma was invited to perform at the Andhra Arts Academy at Vijayawada on 16 December 2007 at 7.00PM and received the honouring from the President Sri KV Subharao and from Satyanarayana Sarma, after a Kuchipudi recital. She performed Lakshmi Pravesham, two Annamacharya pieces – Pallukuthenella and Muthugare – and Rukmini Pravesham, all choreographed by Guru Vempatti Chinna Satyam. She was shawled by the organisers and presented with a gilded statue of Sri Venkateshwara, the Vishnu deity at the temple of Tirupati. She was showered with flowers and presented with a framed felicitation from the Academy. She also performed in the Chennai Dance & Music Festival in the Gana Mukundhapriya Sabha, on the 3 December 2007 and the title “Natyakala Sironmani” was conferred on her by the Sabha. The conductor of orchestra for these performances was Vedantham Ramu form the the Kuchipudi Arts Academy in Chennai.
Please visit her website http://www.nayika.org